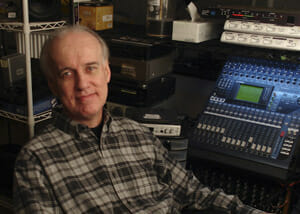 Thomas Steenland is the “one-man army” behind the Starkland record label, which he founded in 1991.

His recordings have received praise in The New York Times, Gramophone Magazine, The New Yorker, Stereophile, Los Angeles Times, Billboard, Washington Post, and Boston Globe, and have been featured on NPR’s All Things Considered and Weekend Edition. Tom has been called “a new music force for 40 years” (Sequenza21), and his graphic design work has been nominated for Best Album Design and Best Concert Photo at the Independent Music Awards.

Listen to a WKCR interview with Tom, discussing the origins
of Starkland, his 40-year history with Tod Dockstader’s music, and more.

Tom’s two most ambitious projects have focused on surround sound. For the first of these, he commissioned 13 leading-edge composers to create pieces for surround sound that premiered on his Immersion DVD-Audio. Publications such as Pro Sound News and Billboard recognized Immersion as the first such recording in history, and upon release, Immersion was often #1 bestselling DVD-A at Amazon.

For his second DVD-A project, Tom commissioned Phil Kline’s hour-long Around the World in a Daze, called “an audio-visual feast that balances hipster zen with the seriousness of Bach and Wagner” by The New Yorker, “a set of sensational études” by New York Magazine, and “an electro-acoustic DVD extravaganza“ by The Washington Post.

Prior to founding Starkland, Steenland served as Executive Director of Owl Recording, where he released works by Samuel Barber, William Thomas McKinley, Vincent Persichetti, George Rochberg, Morton Subotnick, Elizabeth Vercoe, Iannis Xenakis, and others, along with producing one of the first recordings of music by the Pulitzer-prize winning composer John Luther Adams.

“For anyone with open ears, Starkland is essential listening.”
—John Luther Adams

“For 25 years Starkland has been putting out cds and dvds of challenging and beautiful and provocative and powerful music.”
—David Lang